As part of a Memorandum of Understanding (MoU) established last September between The University of Melbourne and Sharif University of Technology in Iran, a joint research program will focus on finding practical solutions to the urgent issues facing the Lake Urmia Basin, a national priority for Iran.

Lake Urmia in northwestern Iran was once the largest salt-water lake in the Middle East in the 1990s, with a surface area of approximately 5,200 square kilometers. Since then, the lake has shrunk to about 10 percent of its former size mostly due to damming of the rivers that flow into it and pumping of groundwater from the area, compounded by drought.

The University of Melbourne team visited Iran to help the conservation of the lake through their research for the Urmia Lake Restoration Program (ULRP). Professor Peter Scales from the Melbourne School of Engineering said the team, along with key partners in the private, government and research sectors from Australia, will draw on their extensive experience in water reform.

“Similarities of climate and projected climate trends as well as the dominance of irrigation water withdrawals are key common elements. These insights will allow us to offer practical help and sustainable and productive water management programs.” 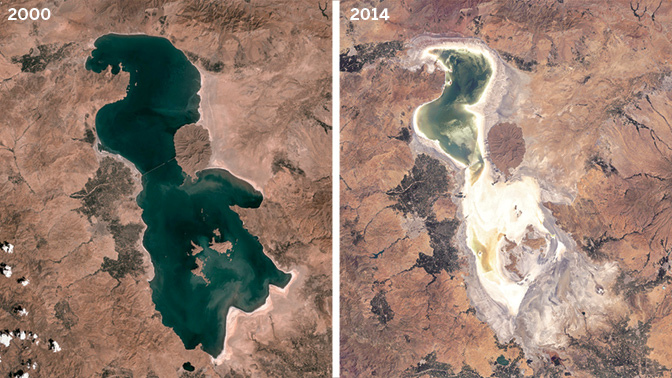 The program is just one of many cooperative efforts and research exchanges between Australia and Iran in the water and energy sector that is aimed at boosting Iranian capability, particularly through sharing of Australia’s experience in water scarcity and desalination.

In March, the AWP agreed to fund a proposal for providing a plan for the Iran-Australia Water Program to the Iran Ministry of Energy (MoE), contributing to the ULRP. The request comes following the MoU and a number of exchanges between Australian water specialists and academics to Iran, with high-level support from the MoE.

Iran’s fledgling water desalination industry not only needs financial support but also advanced technology to meet demand for stable supply of drinking water, particularly in the dry southern regions, with the opportunity for Australian companies to play a role in the potential construction of 50 desalination units. A new joint aqua research centre to help manage Lake Urmia is already in planning by the universities.

Michael Stewardson, a Senior Lecturer in the Department of Infrastructure Engineering at The University of Melbourne, reflected on their team’s visit to Iran where they observed executive initiatives by the government that will yield successful outcomes in near future. However, he also emphasised the complexity of water issues and that proper restoration efforts will take time.

“In Australia, we learned to progress slowly because we faced problems every time we speeded up. It is important to have a good, even if slow, perspective.”

Dr Stewardson further concluded that, “promoting the culture of comprehensive cooperation marks an important part of the project and in order to achieve the goal in the ten-year time horizon, the belief needs to be fostered that every single individual needs to participate in restoration of Lake Urmia. We intend to exchange experiences with Iranian counterparts in order to expedite resolution of water issues in Iran by achieving public participation as the strategic arm of the government and society.”