Former Australian Water Partnership Young Water Professional (YWP) Kitlang Kabua has been elected as a Member of Parliament (MP) in the Marshall Islands.

At 28 years old, Ms Kabua is the youngest MP ever elected to Parliament—or Nitijela, as it is known in the Marshall Islands. She was elected for the first time in the November 2019 elections to represent the Kwajalein Municipality and now serves as Minister of Education, Sports and Training—one of ten elected Ministers in the Presidential Cabinet.

Ms Kabua acted as Special Advisor to the senior management team at the Kwajalein Atoll Joint Utility Resources, Inc (KAJUR) from 2015 until 2018. During her time in this role, the Australian Government’s Australian Water Partnership (AWP) and the Pacific Water and Wastewater Association (PWWA) established the YWP Program—facilitated by AWP Partner Hunter H2O—welcoming the first cohort of YWPs in 2017. Ms Kabua was among this initial group and says that her experience as a YWP was valuable in building the skills needed to progress her career.

“My time as a YWP was definitely rewarding and helped me build key networks and capacity that I find useful today,” said Ms Kabua.

“One of the most influential exercises I encountered during my time as a YWP, was the mentorship program. I discovered mentors and role models who have shaped me to who I am today. My time as a YWP during the PWWA has also taught me how to be an effective mentor, shaping the next generation of future leaders.”

Through her role at KAJUR, Ms Kabua worked on the Ebeye Water Supply and Sanitation Project (EWSSP), a project jointly funded by the Australian Government, Asian Development Bank and the Government of the Marshall Islands which aims to improve the health and wellbeing of the community through improved water supply and sanitation services and hygiene behaviour. Ms Kabua played a leadership role within KAJUR who is delivering the EWSSP with the support of three Australian organisations – GHD, CCB Envico and Osmoflo.

From August 2018 until her recent election, Ms Kabua worked as the Ebeye Project Representative on Phase II of the World Bank-funded Pacific Resilience Program—a series of projects to strengthen Pacific Island countries’ resilience to natural disasters and climate change.

In an interview with the ABC, Ms Kabua said that climate change would be an important issue for President David Kabua and his newly elected Parliament to address, most likely through the development of a disaster risk management plan.

“Most atolls and islands in the nation don’t have anything, so we need to tell people where to go and what to do in times of disaster. We also need to start thinking about a plan if our islands become uninhabitable,” said Ms Kabua. 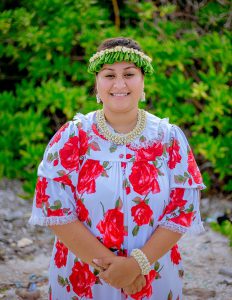 Ms Kabua and former President Hilda Heine, the first female leader in the Pacific, are the only women in the 33-seat Nitijela. With only a handful of female MPs since the Marshall Islands gained independence in 1979, Ms Kabua says that as the youngest MP, she hopes that she can inspire future young women leaders. She also sees women’s issues as a top priority, with women’s economic empowerment an important aspect.

“If women are empowered, education and health are also improved,” says Ms Kabua.

She hopes to see small grants become available to encourage women to pursue entrepreneurial ideas, enabling them to generate their own income and contribute to their households.

“I recognise the importance of gathering young minds who are passionate about improving the quality of life in their home countries, in the region and in our overall global community,” said Ms Kabua.

“This is the collaboration and unity I experienced as a YWP, and for this I am grateful.”

Ms Kabua took her oath of office on Monday 13 January and will complete a minimum four-year term in the Nitijela.