Uzbekistan is undergoing an economic and social transformation. President Shavkat Mirziyoyev is prosecuting an aspirational reform agenda spanning numerous sectors of the country’s economy. Reflecting the optimism of many observers, The Economist declared Uzbekistan its 2019 ‘country of the year’, an award that ‘celebrates improvement’.

In 2020, it is the turn of Uzbekistan’s agricultural water sector to attract the attention of the country’s reformers. Like Australia, Uzbekistan is a major producer of cotton, wheat and other irrigated crops. The vast majority of the country’s water use is in irrigated agriculture, yet water productivity is comparatively low, ageing irrigation infrastructure is contributing to inefficiencies in water conveyance and use, and outdated pumping infrastructure contributes to high costs associated with operating many irrigation systems. To meet these and other challenges, and consistent with a broader ambition to transition toward a market economy, Uzbekistan’s Ministry of Water Resources is now developing a national Water Sector Development Strategy.

“Although Asia’s progress over the last two decades has been remarkable, the region cannot sustain its high growth without addressing the challenges threatening water security. Meeting the region’s socioeconomic challenges will require going beyond infrastructure to address outstanding issues connected with water resources and provision of water services,” said Bambang Susantono, ADB Vice-President for Knowledge Management and Sustainable Development.

The Australian Water Partnership (AWP) has lent much-needed assistance to the development of this Strategy, supporting one of its principal International Partners, the Asian Development Bank (ADB). Working with the ADB (under the leadership of Yasmin Siddiqi and consultant Jeremy Bird) and the Swiss Agency for Development and Cooperation, AWP Australian Partner Aither has spent 12 months contributing technical and strategic insights to the development of the Strategy and its predecessor document, the Concept on Development of the Water Management Sector. The final version of the Concept was formally approved by the President on 9 July 2020, paving the way for completion and approval of the strategy. 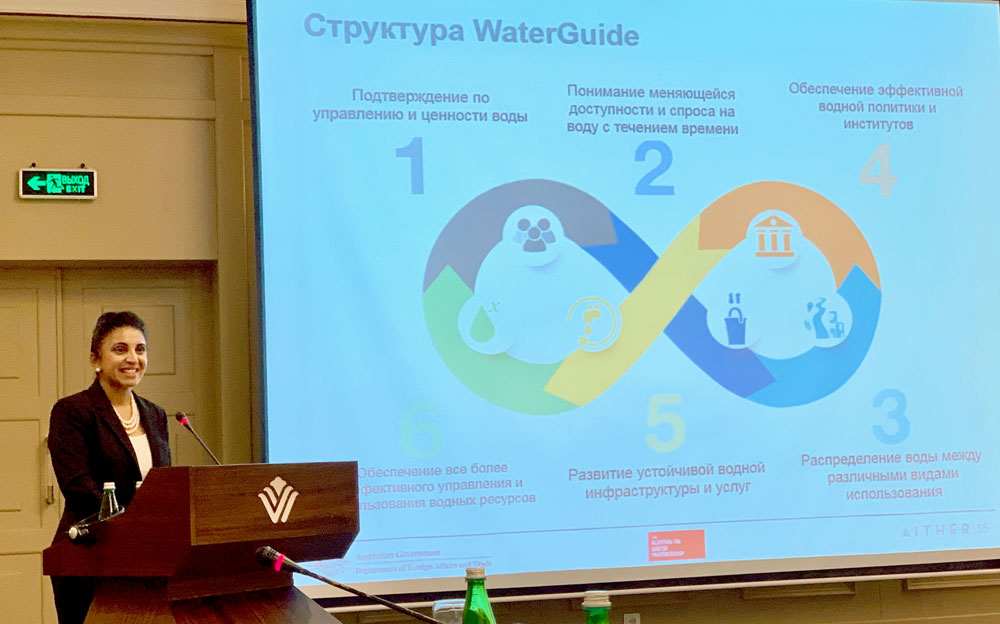 AWP’s contribution to the Concept and Strategy, delivered by Aither, included inputs at all stages of design and development. In 2019, the emphasis was on sharing the Australian water reform story and applying the WaterGuide framework (also available in Russian) to inform conversations about the structure and content of the Concept. In the final months of the project, the focus was on preparing two discussion papers to inform development of the Strategy, one on reform options for water allocation and entitlements, and one on irrigation service fees and cost recovery.

Suggestions were made to enhance the allocation approach through greater use of water planning, defining sector-based limits on total water use, and considering implementation of bulk and individual entitlements over time. Suggestions on cost recovery focused on principles and process to better reflect water user needs and demands, including their willingness to pay for services, with investment in and maintenance of water infrastructure. There is scope for major reform in both areas, but a gradual and phased approach is required to ensure success, in addition to linking with other reforms, such as further opening markets associated with production of different agricultural commodities. Opportunities for transferring learnings from the Australian water reform journey, and from the experiences of other countries, were highlighted.

This project provides a model for close collaboration between AWP’s International and Australian Partners to deliver improved outcomes from water resource management in Asia and leverage AWP’s funding contributions to enhance Australia’s influence. The ADB is currently preparing a USD150 million loan to assist in the modernisation of outdated irrigation and drainage systems in Uzbekistan and continues to support the development of the water sector strategy, consistent with an Asia-wide commitment to support investment in water infrastructure and improved use of water.

Recognising the similarities between the Uzbek and Australian context, there has been much interest in the Australian experience in Uzbekistan, including at Ministerial level. It is hoped that there will be further opportunities for Australian expertise to be deployed in line with the strong demand for this based on Uzbekistan and Australia’s shared aspiration to optimise the value of scarce water resources in irrigated agriculture.